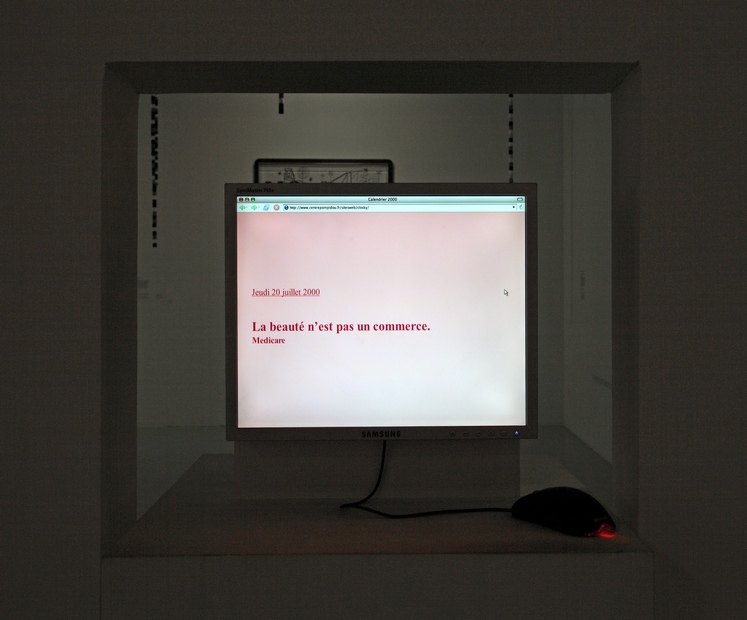 The work entitled Calendrier 2000 (calendar for the year 2000), published on the Centre Pompidou website for the exhibition 'Le temps, vite' (Now's the time!) in 2000, takes the form of an internet site composed of 365 html pages interconnected by hypertext links. The navigation principle is simple: the user clicks on the date to go from one page to another and sees the calendar unfold in reverse chronological order, from the day in question to 1 January 2000.
The pages all follow the same model of basic graphic design: a date followed by a quotation which is accompanied by the name of its 'author'. But the maxim Closky offers for each day of he year is different from the sayings which typically appear on block calendars: they are advertising slogans whose 'authors' names are in fact the brands they promote. These slogans are sequenced by analogy, often carrying over a word from one to the next, as with 'Everything begins with the glance' (Clarins cosmetics) and 'Life is just a glance' (Isabel Canovas accessories). Sometimes the relationship is less direct, depending on mental associations, as with 'The best is yet to come' (Apple) and 'Let's take the future in hand' (Les Echos newspaper), or syntactical repetitions, as with 'Savings are trendy' (E. Leclerc hypermarkets), 'Luxery is timely' (Elle fashion magazine).
The artist is thus drawing on the comic effect of the discordant proximity of the quotations and the accumulation of the slogans, which loose their meaning and, in addition, are no longer associated with the intended image of the product or advertising visual.
'As Douglas Huebler's heir in the era of the over-consumption of signs, Closky has no more desire to add others, even a more or less interesting one, to a world which is already full of them. For this reason, His method quite often consists of taking over pre-existing signs and attempting to eliminate the teleology and signified content, through intensification, accumulation or dilution, so as to preserve only the amusing enunciation of their signifiers, where the reiteration reveals the alienation generated by the standardised codes of representation.'[1]
With Calendrier 2000, Closky pursues the problematics and uses the techniques which have characterised his work over the past ten years: pre-existing materials, from advertising for example, are taken out of context and stripped of their meaning through decontextualisation and accumulation. These collages of sundry but practically interchangeable advertising documents have been put together in various artistic media, whether video (notably with 200 bouches à nourrir [200 mouths to feed], 2004, a collage of hundreds of ad sequences in which the actors are swallowing food) or paper collage (Mon père [My father], 2002, which recreates a fictitious family album with magazine ads featuring men). The artist's obsessive work with numbers and catalogues also reappears in Calendrier 2000, through the very use of the calendar, recalling his 1991 piece Les 365 jours de l'année 1991 (The 365 days of 1991) arranged in chronological order.